This is the first big mountain stage of this year’s Vuelta a España. We have already had one uphill finish but today’s final climb is much harder. However, it’s not so much about how much time you can gain on your rivals but more about not losing any time.

With 33 KOM points up for grabs, this is also an important day for those targeting the polka dot jersey. Many riders will want to get up the road early on, which will make for a rapid start to the stage. At least during the opening 35 km until Puerto del Pico begins. This category 1 climb is 15.3 km long and has an average gradient of 5.5 %. It has a few easy parts and a short descent before its final kilometer kicks up with over 10 %.

After a brief downhill section, the rider starts to climb once again. First, they make their way towards the top of Alto de Gredos (10 km / 3.7 % avg.) and then, they take on Puerto de Peña Negra, which starts after 85 km in the saddle. With its 13 km of 4.5 %, this is hardly the most challenging climb of the race. However, after such a hilly start, it won’t be a walk in the park either. The ascent will definitely leave its mark in the legs of the riders. It’s also worth noticing that the top is at nearly 2000 meters height. Some riders may struggle as the air gets thinner.

From the top, a twisty descent of 15 km awaits as the peloton heads towards the feed-zone in Piedrahíta. From here on, the following 70 km are constantly up and down. Even though there are no longer climbs on this part of the stage, the legs will never find rest as the rhythm changes all the time.

After having climbed for about 10 km already, it’s time for the official start to Alto de La Covatilla. It’s set to be 9.8 km long with an average gradient of 7 %. However, if you take out the easy start and closing kilometer, the actual uphill gradients are more like 9 % with multiple parts of double-digits gradients. Unfortunately for the TV-viewers, the weather forecast predicts a strong headwind on the ascent. This means it will be difficult to create big differences as the climb is very exposed to the wind. If the GC riders end up fighting for the win, this could very well come down to a sprint within a select group.

In 2011, Dan Martin used his fast finish to win from a group of six riders, showing it’s not really a very selective climb. In fact, the first 25 riders all arrived within a minute of the winner. 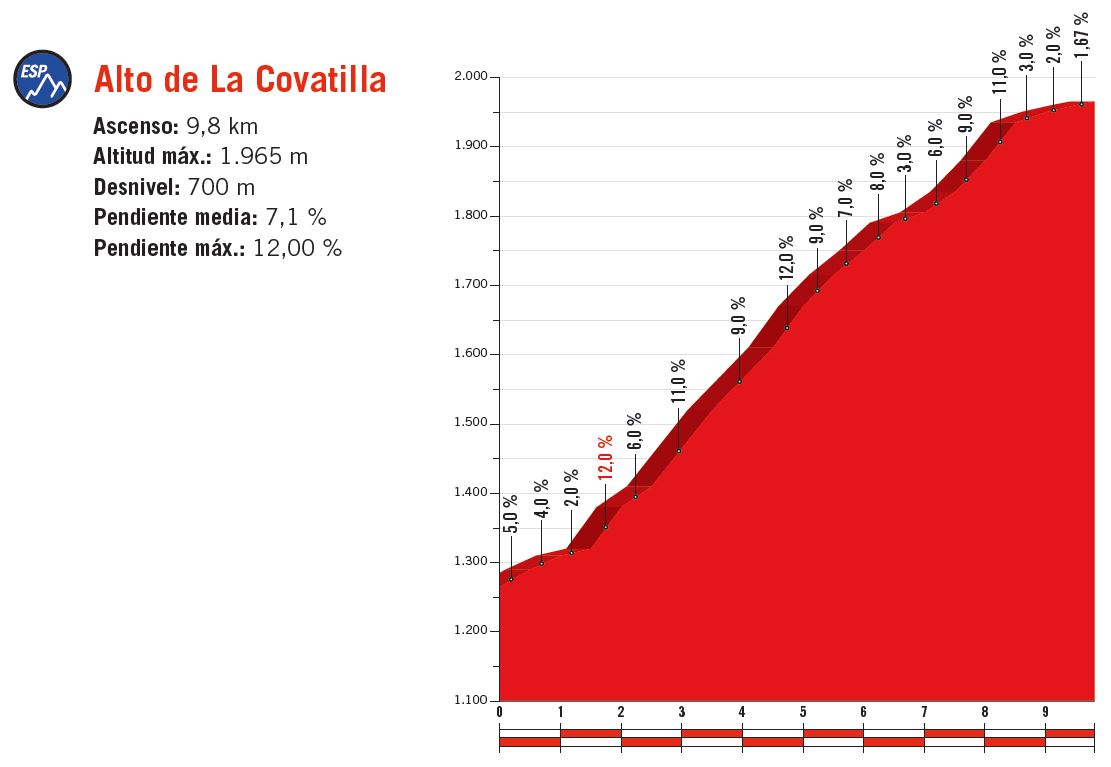 Given the characteristics of Alto de La Covatilla and that the headwind might put a lit on the attacks, Alejandro Valverde will have good chances of sprinting to victory today. None of the other GC riders can match sprint of the Spanish veteran. If they want to win, they need to distance him on the steep percentages in the middle section of the climb. Still, judging from his performance on the uphill finish on stage 4, Valverde won’t be easy to drop.

Both Miguel Ángel López and Simon Yates possess a good sprint on top of a climb as well. However, both would also have preferred an uphill sprint compared to what awaits them on the final meters today. Yates went against team orders on stage 4 and attacked on the last kilometers. It will be interesting to see if he continues to ride as he did in the Giro or if he starts to save the legs for the last week. López too attacked on the slopes of Alfacar but only at the very end. In the previous days, he has seemed to be much more attentive and well-positioned than he usually is. It’s clear to see how focused Astana is on keeping him out of the trouble. There is no doubt that López is in great shape at the moment. It would be a big surprise to see him lose time today.

Prior to the start of the race, Groupama-FDJ was very clear in their communication that Thibaut Pinot would definitely not aim at the general classification in this Vuelta. However, the team still rode as if Pinot was a serious contender. They always had riders around him to protect him and to keep him out of the wind. On stage 4, Pinot showed no weakness as he easily followed the GC riders uphill. It was starting to look like the GC was not out of the question after all. Unfortunately, on stage 6, Pinot lost 1:44 minutes in the crosswind and he’s now over three minutes down on his teammate Rudy Molard who leads overall. On paper, today’s finish suits Pinot very well. If the shape is a good as it seemed to be on stage 4, he should be able to stay within contention and then use his fast finish to sprint for a top position.

The likes of Nairo Quintana, George Bennett and Emanuel Buchmann shouldn’t have any problems staying in the front group either. In fact, it wouldn’t be a surprise to see all three put in a couple of attacks on the steep sections to test their rivals. Molard will most likely not be in the front group all the way towards the top. Therefore, the red leader’s jersey is also up for grabs. This will serve as extra motivation to drop Valverde as he’s second in line right now.

In case a breakaway ends up fighting for the stage win once again, look to good climbers with knack of making it into the right breaks. Riders such as Alessandro de Marchi, Pierre Rolland, Bauke Mollema and Jesus Herrada. As leader of the KOM classification, we can also expect to see Luis Ángel Maté in the break again today.

It will also be interesting to see if Dan Martin can repeat his win from 2011. Knowing that he most likely won’t finish the Vuelta, as his wife is soon to give birth to twins, Martin will have to pick his days carefully to chase success. Being more than 20 minutes down in the GC, he won’t have any problems being allowed to get into the early breakaway. If that happens – and the break makes it all the way – he will be extremely to beat

After having read this preview, I’m sure you have a good idea about which kind of riders will do well today. You may even have your own outsiders in mind. Wouldn’t it be great to use that knowledge to make the stage even more interesting and win cash prizes? I’ve teamed up with the fantasy manager site Zweeler for this year’s Vuelta a España. During the race, they have individual stage competitions with a daily prize pool of 400 Euros for today’s stage!