Today’s stage is very similar to the one we saw yesterday. There is not as much climbing to do but with an uphill finish, the sprinters can’t be sure to fight for the win this time either.

The opening 60 km, on which the peloton heads towards the Córdoba region, aren’t very hilly. There are a couple of small ascents but no major difficulties. It should however be enough to get a strong group up the road. After 70 km, the first categorized climb of the day begins. Alto de Españares is 10 km long and has an average gradient of 3.4 %. From this point on, the riders will be able to enjoy the tailwind for the remaining part of the stage. The favorable wind conditions mean the pack will have to keep the breakaway on a tight leash at all time if they want a chance to catch it again before the line.

As the peloton approaches Santa Eufemia, the road starts to kick up. This is not a categorized ascent but the five kilometers through the town still rise with 5 % average. Afterwards a downhill section of about 10 km await the riders as they make their way towards Almadén where the finishing line is located.

The run-in is not very challenging and it takes place on a good road without any difficult turns. However, the gradients won’t make it easy. The final two kilometers are uphill with gradients between 4-8 %. With about 700 meters to go, the riders take the long way around in the roundabout to make a 180° turn onto a smaller road. Positioning will be extremely important here as the group will be stretched out significantly. Much like the sprint finish on stage 6, you won’t have many chances to move up if you’re not in the good position already at this point. The remaining part of the stage is uphill with 6-7 % and include a single hairpin corner with 300 meters to go before it’s straight-out towards the line. 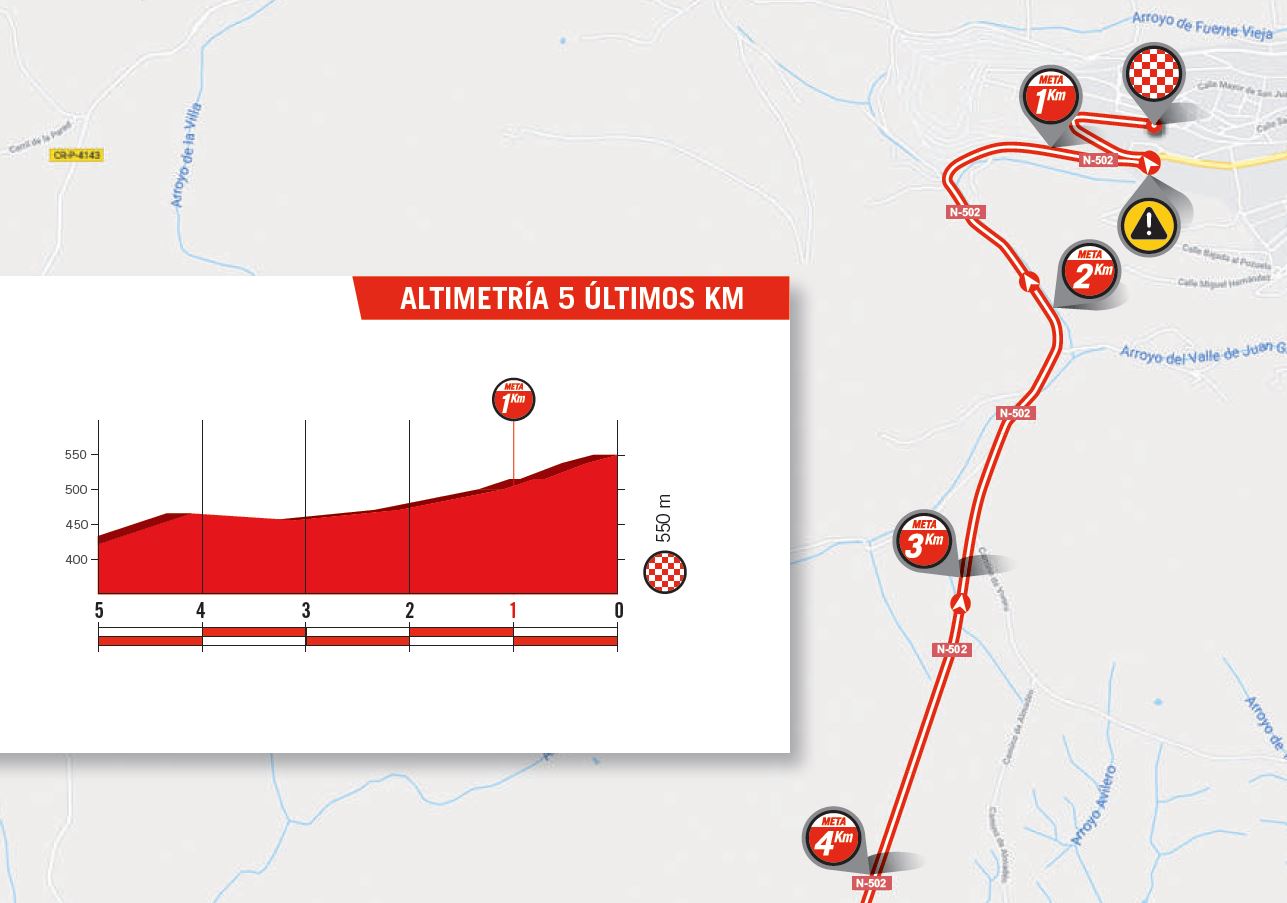 Given his performance on stage 7, Peter Sagan seems to be the man to beat. Despite claiming he’s far from top condition, Sagan still managed to stay in the select group of the GC riders in the challenging final. BORA-hansgrohe has a lot of faith in the world champion and we can expect them to try to control the stage, hoping to set up Sagan for the uphill sprint. On paper, he should be able to cope well with those two kilometers of 5 %. However, he needs to be in a good position going into that last roundabout. Even though he’s strong, I don’t think he’s yet able to first make up for a poor position and then still have energy to win as well.

One of the riders Sagan surprised by being in the mix yesterday was Alejandro Valverde. The Spanish veteran hadn’t even noticed Sagan until the final sprint. Today, Valverde will be prepared to take on the Slovakian on the final slopes. Personally, I think he’s the one with the best chance of beating him. Sagan might be strong but if Movistar really makes the last uphill kilometers hard, then even Sagan will feel his legs on the final stretch. In peak condition, Sagan would be almost unbeatable today. However, even though he was good on stage 7, he’s still not at the level we are used to see him at. Valverde is in excellent condition at the moment and if he enters the final roundabout in prime position, he will be very difficult to beat – even for Sagan.

If this stage indeed comes down to a sprint, Michal Kwiatkowski and Dylan Teuns should be up there as well, fighting for the top positions. Both showed great shape in Tour de Pologne recently where they finished first and second in two uphill sprint finishes in a row. Kwiatkowski already proved to be where he needed to on stage 2 when he challenged Valverde for the win. It will be difficult for him to beat both Valverde and Sagan today but he’s very consistent. If he sees an opening, he won’t hesitate. Teuns was hoping to fight for the win on stage 2 as well but an ill-timed puncture left him out of contention. He lacked a little bit to follow the best riders on the steep percentages on stage 7 but he might bounce back with a strong performance today.

Riders like Omar Fraile, Dan Martin, Matteo Trentin, Fabio Felline and Tony Gallopin also have what it takes to do well on this finish. Gallopin seems to be flying at the moment. He might very well be up there fighting for the top positions again today. The same goes for Eduard Prades. After signing with Euskadi Murias for this season, Prades has had an impressive year on the bike with several top performances against the best riders. His final sprint on stage 7 was particularly impressive. This type of uphill finish suits the Spaniard very well. I won’t be surprised to see Prades fight for podium again today.

Regarding the pure sprinters, it all depends on how hard Movistar and BORA-hansgrohe pull on the last 30 km. Knowing they need to tire out the likes of Elia Viviani, Nacer Bouhanni and Giacomo Nizzolo, I think the pace will be very high on the climb in Santa Eufemia. It’s probably not enough to drop the sprinters but it will slowly drain their energy reserves for the sprint. Furthermore, if Movistar sets a high pace on the last two kilometers uphill, even Viviani will struggle to match the speed of Valverde and Sagan on the last slopes.

After having read this preview, I’m sure you have a good idea about which kind of riders will do well today. You may even have your own outsiders in mind. Wouldn’t it be great to use that knowledge to make the stage even more interesting and win cash prizes? I’ve teamed up with the fantasy manager site Zweeler for this year’s Vuelta a España. During the race, they have individual stage competitions with a daily prize pool of 200 Euros for today’s stage!

Below is the Strava section for the final two kilometers of the stage. It seems safe to say that the leaderboard will look very different at the end of stage.