Looking at the profile of today’s stage, it may not seem like a difficult one. However, the riders still have over 2000 meters of climbing to overcome. Especially the opening 40 km are predominantly uphill with very few and short downhill sections. A breakaway will have good chances of making it all way once again. Furthermore, there is tailwind on the first 120 km, which will make for a fast day in the saddle. We can expect a furious start to the stage with nonstop attacking until the right group gets formed at the front.

The first categorized ascent is Alto Collado de Laude. The 5 km towards the top of this category 3 climb have an average gradient of 6 %. The top comes with just under 70 km left to go. From here on, it’s mostly downhill for following 50 km. During this part, the route takes the peloton through the finishing area – but from the opposite side of where they’ll finish later on.

With 17 km to go, the riders start on Alto de Ceal. This is not a very difficult climb but its 4.5 km of 5.4 % will serve an excellent place to put in a late attack. The scenery on the way towards the top is spectacular. Unfortunately for the riders wanting to attack on these slopes, they not only have to battle the uphill gradients but also a headwind. This means you will benefit greatly from staying in the wheels and it makes it harder to create a solid gap.

After crossing the top, a 3 km long descent awaits. It starts out on the same small road as on the climb but it later turns into a bigger road with 10 km left to go. Afterwards, the riders begin to climb again towards the intermediate sprint in Hinojares. Anybody with ambitions of winning today’s stage will have to pay very close attention to this part of the stage. You can’t really see it in the road book but the gradients through the town hit double-digits several times. The road is narrow and a strong puncheur can really make a difference here. The road opens up later on but it continues to rise. In total, this uphill section is about 2 km.

As the riders turn right onto A-6206 with 7 km to go, they take on a small descent before they cross the bridge and another short uphill section begins. Afterwards, they will tackle three kilometers of false flat. This part is slightly uphill with 1-2 %. It may not sound of much but right after that hard uphill effort at the intermediate sprint, this headwind section will make it extremely hard for a lone rider to keep a strong chase group at bay.

With one kilometer to go, the peloton enters the finishing town Pozo Alcón again. It’s a bit twisty and uphill here with a couple of corners but it’s not very steep. The final turn comes in the roundabout with about 300 meters to go. From here on, the road starts to rise again all the way to towards the line. The final part is about 7 %, which means you need to pack a good uphill sprint if you want to win this stage. 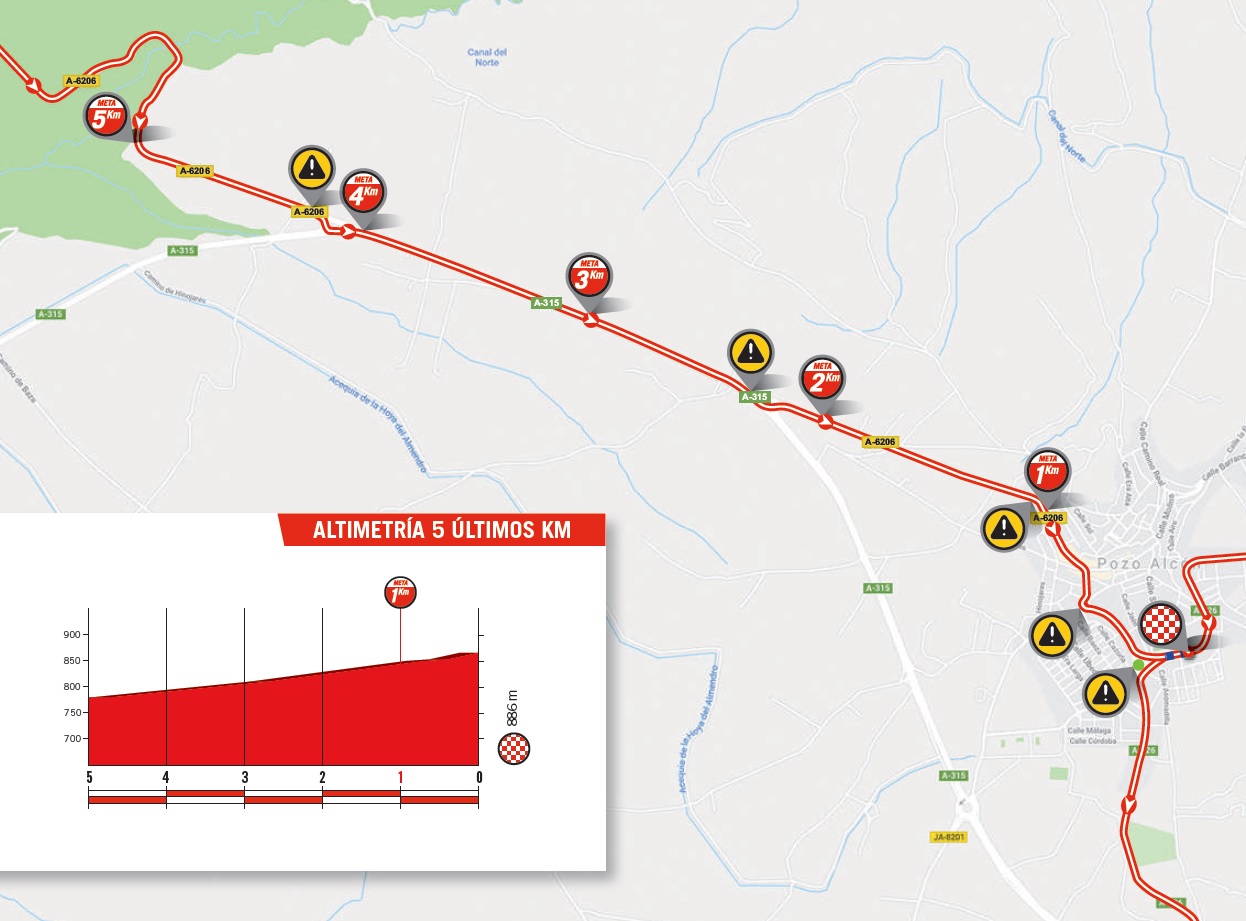 With the tailwind at the beginning and the challenging finish, this should be a stage for a breakaway. However, if the peloton decides to keep the break in check, the top favorite will be Alejandro Valverde. Yesterday’s stage close to his home in Murcia wasn’t suited for his characteristics. Today’s finish though, is tailor-made for him. It won’t be easy for Movistar to control the stage and it’s far from given that they will even try to. Still, if they do, Valverde is the man to beat.

The biggest rival to the Spaniard is Michal Kwiatkowski. The Pole probably thought he had the stage win in the bag when he opened his sprint on stage 2 but ultimately, Kwiatkowski didn’t stand a chance against Valverde. If it comes down to another mano-a-mano fight this time, I doubt the end result will be much different.

If the break ends up making it all the way, as expected, we should look to strong riders who can cope with short and steep climbs and still pack a fast finish. Riders like Jay McCarthy, Edu Prades, Fabio Felline, Omar Fraile, Jetse Bol, Gorka Izagirre and Dani Moreno all fit this category. So does Tony Gallopin. On paper, he would be a top contender on this kind of finish as well. However, since he’s seventh in the GC, Gallopin most likely won’t be allowed to enter the morning breakaway. Instead, he will have to hope that Movistar decides to chase so he gets a chance.  However, against Valverde and Kwiatkowski it won’t be easy. Podium is definitely within his reach though.

Groupama-FDJ had a bittersweet day on stage 6. They managed to keep the leader’s jersey on the shoulders of Rudy Molard but Thibaut Pinot lost 1:44 minutes in the crosswind. Depending on the constellation of the breakaway, the French team shouldn’t have any problems keeping the jersey for another day. In fact, this finish is not bad for neither Pinot nor Molard. Both have what it takes to fight for the top positions today.

Regarding the sprinters, I think the final 20 km will be too hard for them to stay near the front. The headwind on the climb will help them not to lose too much ground but the steep and narrow section around the intermediate sprint won’t make their lives easy. On his best days, Peter Sagan could be a candidate but not in his current condition.

After having read this preview, I’m sure you have a good idea about, which kind of riders will do well today. You may even have your own outsiders in mind. Wouldn’t it be great to use that knowledge to make the stage even more interesting and win cash prizes? As you may know, I’ve teamed up with the fantasy manager site Zweeler for this year’s Vuelta a España. During the race, they have individual stage competitions with a daily prize pool of 200 Euros for today’s stage!