After two hard days in hilly terrains, today’s stage should be one for the fast guys. The relatively short distance, the expected headwind and “just” 1000 meters of climbing mean the teams of the sprinters should be able to control the morning breakaway. We are entering Alejandro Valverde territory near Murcia but unfortunately for the Spanish veteran, he won’t have many chances to shine today.

From the start in Huércal-Overa, the first 30 km take the riders towards the coastline, which they will continue alongside as they head northeast towards the first categorized climb of the day. Alto del Garrobillo is 3.8 km long and has an average gradient of 5.7 %. The feed-zone is located 20 km later with 78.5 km to go.

After the riders pass the top of Alto del Cedacero (4 km / 6.2 %), there are just over 50 km left of the stage. Even if some of the sprinters should be dropped here, they still have plenty of time to make their way back to the pack. The intermediate sprint is placed in Cartagena after the descent from the climb. Most likely, the morning breakaway will still be at front at this point, giving them a chance to fight for a little prize money.

The final 20 km are pancake flat as the peloton makes its way into the finishing town San Javier. From here on, only two corners remain on the last 5 km. The first one is a left-hand turn in a roundabout just after the 4 km to go banner, while the second one is on the last kilometer, where the riders go the long way around in the roundabout. This last maneuver will stretch out the peloton significantly, meaning it will be almost impossible to move up anymore after that roundabout. If you’re not in an ideal position heading into the last kilometer, it’s pretty much game over already. After the roundabout, it’s straight-out towards the finishing line on a wide road. 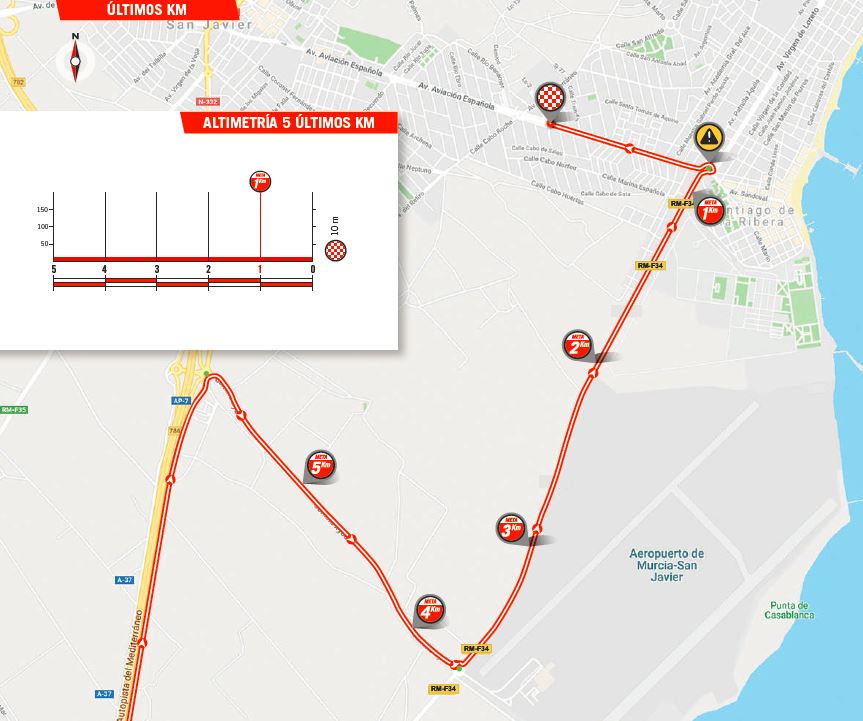 This being a day for the sprinters also means it’s a day for Elia Viviani. As already mentioned several times in the previous previews, Viviani has been the best sprinter in the world this season. He proved that again on stage 3 when he finished off the impeccable leadout by his team to cross the line first in Alhaurín de la Torre. With Fabio Sabatini and Michael Mørkøv as the last two riders in the sprint train, Viviani is in very capable hands. Without any incidents, it’s hard to see anybody beating the Italian champion today.

Trek-Segafredo lost their GC ambitions on stage 4 but in Giacomo Nizzolo, they still have a solid card to play in the bunch sprints. Nizzolo is very consistent and he proved to be in great condition on stage 3 when he finished second. Being out of a contract for next year, the Italian seems stronger than ever at the moment, as he’s showing off his worth to potential new teams. If something happens to Viviani, Nizzolo is probably the best pick for the stage win.

Nacer Bouhanni is also very eager to prove his worth in this Vuelta. He’s usually very fast on the final meters and if he can manage to find a gap, he might be able to match Nizzolo. It’s a tall order for Bouhanni and Cofidis to take the win here but after first Dimension Data and then EF Education winning their first WT races of the season, anything seems possible in this Vuelta a España. Riders like Max Walscheid, Simone Consonni, Ryan Gibbons and Danny Van Poppel should also be up there fighting for Top5. Van Poppel started his sprint too early on stage 3 and then faded towards the line. If he can time it better today, he will be a serious podium candidate.

Ahead of stage 3, Peter Sagan said he was only at 60 % compared to his condition at the beginning of the Tour. However, he still managed to hang on to take third place in the sprint. It’s unlikely that Sagan can outsprint Viviani but if the Italian isn’t in a good position in the final, it’s really anybody’s game in this field. Matteo Trentin, Jon Aberasturi and Marc Sarreau are other good outsiders for this stage. Especially Sarreau will be interesting to follow to see if he can ride the wave of success at Groupama-FDJ after Rudy Molard took the leader’s jersey on stage 5. In Benjamin Thomas, Sarreau has an extremely strong leadout rider to position him on the final kilometer.