Even though stage 2 ended up being somewhat of a GC fight, it didn’t really reveal too much about the conditions of the favorites. Today however, we will get the first real answers to who we can expect to see fight for the overall podium in Madrid.

From the start in Vélez-Málaga, the riders head towards the coast where they will continue alongside the sea for the following 35 km. While this first part is predominantly flat, the terrain completely changes after about 50 km of racing. From here on, the course suits the mountain goats, which appropriately is also the name of the first climb.

Alto de la Cabra Montés is 15.7 km long and has an average gradient of just under 6 %. There is a short descent on the first third part of the climb but after that, the percentages are very steady towards the top. However, despite passing the KOM sprint, the riders continue to climb for a little while towards the feedzone. Afterwards, they take on a rather easy descent of about 10 km before the road kicks up again. This climb isn’t categorized but it still has parts of 7 % on the final part.

After a long downhill section, where the peloton will be able to keep the pace high, the riders enter Granada. From here on, it’s basically uphill for the remaining part of the stage. Puerto del Alfacar is far from the most challenging climb of this year’s Vuelta but its 12 km of 5.4 % is definitely enough to make a selection. The steepest part comes with about 7 km left to ride when the peloton turns left to tackle a section of double-digits gradients. The following four kilometers are steady at 6-8 %. This is the part where the GC riders will be able to do the most damage. Afterwards, the climb evens out a bit before the last kilometer kick up with about 5 % towards the finishing line. 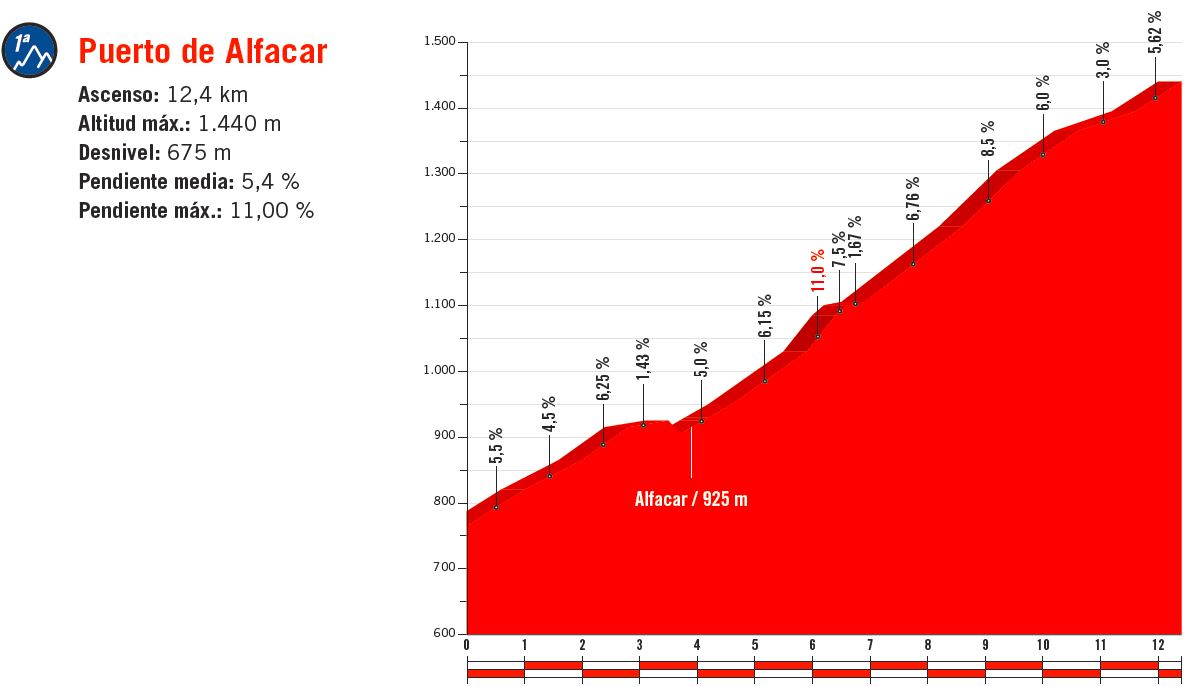 With such an equal field as we have this year, it’s hard to predict who will start out best on the first mountain top finish. On paper, Movistar should be the team to control the stage with both Nairo Quintana and Alejandro Valverde, not to mention Richard Carapaz. All three have the abilities to win this stage. While Quintana and Valverde may wait for the last part of the climb, I wouldn’t be surprised to see Carapaz give it a go on the steep part with over 10 %. That is if he manages to cope better with the heat. In Caminito del Rey, he said that his legs were good but that the high temperatures drained him. Regarding Valverde, the other stage candidates know they can’t bring him to the line. They need to drop him on the last 7 km if they want a chance to win. However, that’s much easier said than done.

As mentioned in the big overall preview, I see George Bennett as a serious contender for the overall podium in Madrid. He has prepared specifically for this race ever since the Giro and he proved to be in excellent shape on stage 2 where he took fifth place in a finish not really suited for his characteristics. Today’s final ascent looks very good for the strong Kiwi. The Vuelta is long and the third week is extremely hard. Therefore, I don’t think he will attack too early on the climb, not even if he feels like he could. Most likely, he will follow the top GC riders and wait for his moment on the final two kilometers. Bennett is very skilled at sneaking away when he senses a moment of hesitation amongst his rivals. We could easily see him trying do to just that on the false flat part prior to the last kilometer. LottoNL-Jumbo also has a good alternative in Steven Kruisjwijk who looks to have kept the condition he showed in Tour de de France.

Two of the main favorites for the GC, Simon Yates and Miguel Ángel López should fancy this finish as well. Both pack a very strong sprint uphill. However, both are usually not great in the heat. With temperatures well over 30°c once again, they may lack that last lethal punch. Instead, Mitchelton-Scott could put their faith in Jack Haig who did very well on stage 2. Haig went here to train with Esteban Chaves prior to the Giro this year and we all saw how strong he was there.

The favorites and outsiders categories could easily have been merged for this stage. There are so many riders with a good chance to take the win today. The hierarchy hasn’t really been established yet so many riders will feel they have a shot.

On paper, Thibaut Pinot should be up there fighting for the stage win. He’s fast on the line and usually quite strong on these kinds of climbs. According to his team, Pinot is only in the Vuelta to target stage wins. The general classification is of no interest. However, Groupama-FDJ has been very focused on protecting him these first two road stages. If he performs well tomorrow, he might chance his objective. The biggest challenge for the Frenchman will be the heat. He has struggled heavily in these temperatures in the past. Still, if he’s in the front group on the last couple of kilometers, he’s a good pick for the stage win.

It will be interesting to see how well Michal Kwiatkowski copes with a long ascent like Puerto del Alfacar. He has been absolutely flying since Tour de Pologne but he hasn’t been tested on a 20+ min climbing effort. The final part is good for him but he may find the steep middle section too hard. If so, David de la Cruz will be ready to step up and take over the leadership of the team. Riders like Wilco Kelderman, Enric Mas, Emanuel Buchmann, Fabio Aru and Ilnur Zakarin should all be in the mix too.

In case a breakaway makes it all the way, look to opportunistic riders like Alessandro De Marchi, Jesus Herrada, Tiesj Benoot, Alexandre Geniez and Mikel Bizkarra. The latter was recently training in this area and he knows the final climb very well.

As you may know, I’ve teamed up with the fantasy manager site Zweeler for this year’s Vuelta a España. In addition to their big overall competition, they also have stage competitions with a daily prize pool of 300 Euros for today’s stage.