After about five kilometers of neutral riding in Marbella, the riders start climbing right from the beginning of the official start of the stage. Puerto de Ojén is 6.5 km long and has an average gradient of 5.2 %. It’s a steady climb and it will make for a very aggressive start with constant attacks until the right group gets formed at the front. Being the first categorized climb of the Vuelta, Puerto de Ojén is also important for those riders hoping to end the day on the podium getting the KOM jersey.

From the top the climb, the route takes the riders north towards Coin and later Pizarra where they start on a 75 km loop. After the intermediate sprint in El Chorro, the road starts to kick up towards the finishing line in Caminito del Rey. Some may remember this place from the 2015 edition when Esteban Chaves won ahead of Tom Dumoulin who showed his GC potential for the first time. However, this year, the finish is completely different. Instead of keeping left with 2.5 km to, as they did in 2015, taking on the steep part of the climb, the riders continue straight-out this year. This means the finish is much more gentle with gradients around 3-5 % instead of the double-digits gradients we saw three years ago. The steepest part comes in the last hairpin corner with one kilometer to go after a very short downhill part. Afterwards, the gradients are steady towards the top before it kicks up again in the last right-hand turn with 100 meters to go.

However, before we get to the finishing line for the final time, the riders still have 72 km with a couple of ascents to overcome. The terrain isn’t that hard so the sheer speed of the peloton, as the riders fight for positions before starting on the final climb, will most likely be enough to catch any breakaway up front.

Officially, Alto de Guadalhorce is set to be 7 km long but in fact, it’s mainly just the last part that’s of any interest. With 10 bonus seconds up for grabs on the line, we could also see the red jersey change hands today.

For a better view of today’s final, have a look at the Google street view below the map. It starts with five kilometers left to go. 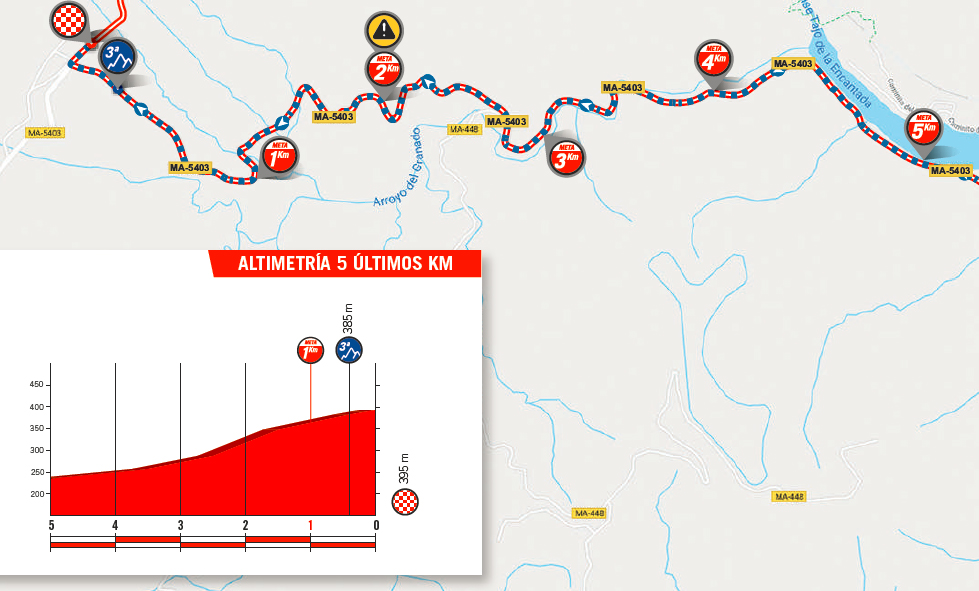 Just as Rohan Dennis is the go-to favorite for any time trial he takes part in, Peter Sagan is also the top pick for any stage with a finish like this. The big question however, is in what kind of shape Sagan has arrived at this race. In peak condition, he would be almost unbeatable in this field but that may not be the case right now. However, it would be foolish to bet against him if here’s there at the end. Should he not be, BORA-hansgrohe can still change tactic and go for Jay McCarthy instead. This finish suits the Australian very well too.

While Sagan’s shape in unknown, there is no doubt that Matteo Trentin is flying at the moment. After a very difficult start to the season with several setbacks, Trentin managed to turn it all around when he won the European Championships in Glasgow. He got his confidence back and he’s now very eager to capitalize on his good shape in the Vuelta. Just as he did last year when he won four stages. Mitchelton-Scott is primarily going for the GC but as they need to keep Simon Yates at the front anyway, it won’t cost them too much to ride for Trentin in the final as well. The team won here in 2015 and with Luka Mezgec to lead out Trentin, the Italian is my prime pick for the stage win.

This category depends entirely on how hard the race is going to be after crossing the finishing line for the first time. If the teams of the sprinters can manage to keep the breakaways under control, we could end up getting a sprint within a big group as the finish isn’t very hard. That means we might see top sprinters like Elia Viviani and Giacomo Nizzolo in the mix. Especially Viviani has a dedicated team to put him in position and lead him out. In case he’s there, he will be tough to beat.

If the climbs ultimately prove to be too much for the pure sprinters, we should instead shift our focus to powerful riders with a strong punch. Michal Kwiatkowski is the obvious pick after his impressive performances in Tour de Pologne. Kwiatkowski is just five seconds behind Dennis in the GC, meaning that if he finishes first or second today, he will take the red leader’s jersey. An extra bonus to boost the motivation. Alejandro Valverde is another rider who should be up there with this kind of finish. He would have preferred a bit steeper climb at the end but on his best days, the Spanish veteran can beat anybody in this field. Later in the race, he will probably have to work for Nairo Quintana so Valverde should really take any opportunity he sees.

For other strong riders who can both climb and sprint look to Fabio Felline, Dani Moreno, Gorka Izagirre, Dylan Teuns, Nicolas Roche, Pello Bilbao and Tony Gallopin. Maybe even a guy like Alex Aranburu who’s doing his first grand tour after an impressive season. This finish is not bad for the young Caja Rural rider.

As you may know, I’ve teamed up with the fantasy manager site Zweeler for this year’s Vuelta a España. In addition to their big overall competition, they also have stage competitions with a daily prize pool of 250 Euros for today’s stage.