Starting out right on the marina in Málaga, the route takes the riders to the end of the pier where they turn around after 1.5 km and start to head back. After passing the lighthouse, the riders continue alongside the beach promenade for about a kilometer. This first part of the course is completely flat. However, that changes when the riders turn left after just over four kilometers. Here, the road starts to kick up. The following kilometer has an average gradient of 5.5 %, which means that even though it’s a very short distance, you need to have something in the legs for this kicker.

From the top of hill, a very fast decent follows. The first part is straight-out before the riders turn left and continue on Calle Victoria. A desirable street name for those gunning for glory on the opening day. After passing through the tunnel, the final 1.5 km are flat towards the finishing line. The final corner comes with 300 meters left to ride, when the riders turn right onto the midtown shopping street Calle Marqués de Larios, which will set for a rather spectacular finish to this first stage of the Vuelta. 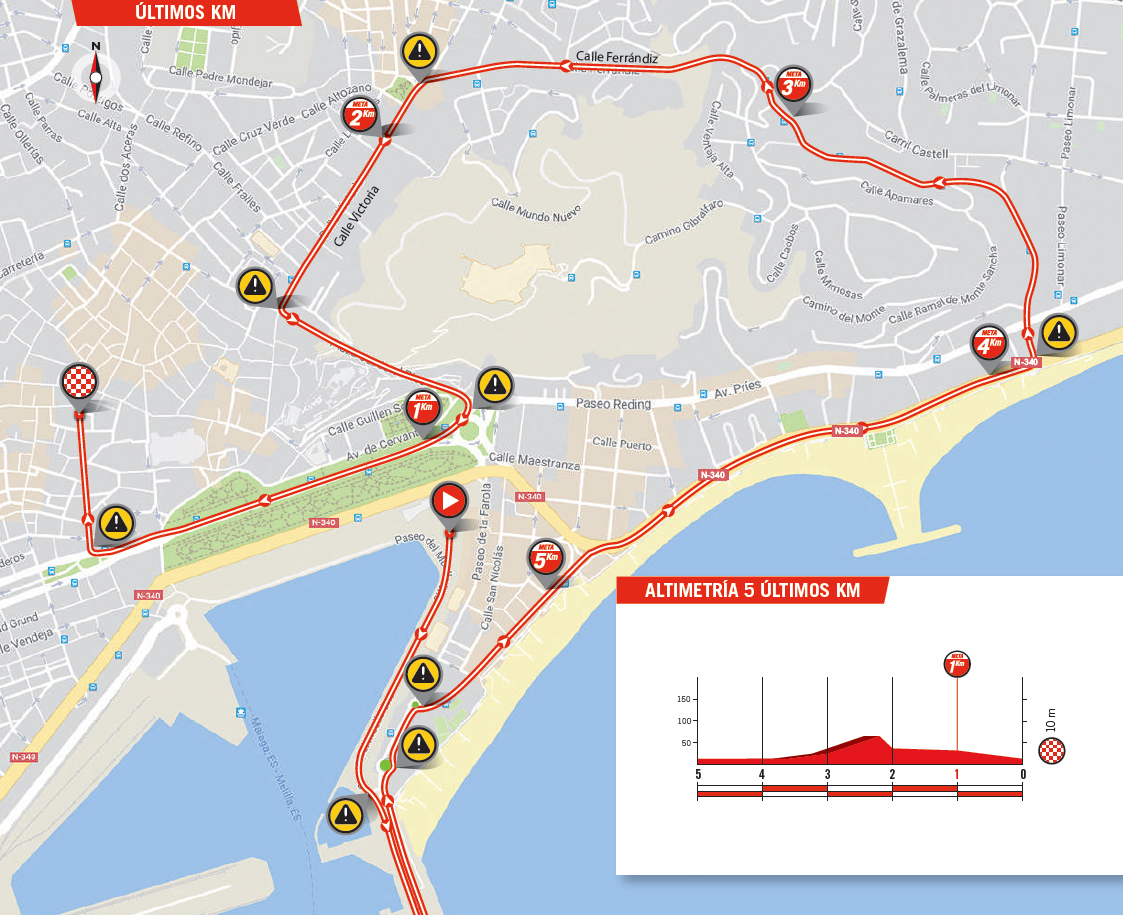 The sole presence of Rohan Dennis in any time trial means he’s the go-to favorite for the win. Today is no exception. The two time trials in the Vuelta are Dennis’ proclaimed big goals in the race. This one is especially important with a leader’s jersey up for grabs as well. The course suits him nicely. In fact, it’s hard to create a route that doesn’t suit the Australian against the clock. Dennis missed out on the win in the opening time trial in Giro d’Italia by just two seconds to Tom Dumoulin this year. He was also just one second from winning the prologue in Tour de Romandie. After two such close calls, this could very well be the time that Dennis gets it right from the start. The BMC riders are never to be underestimated in any form of time trials. Dennis has previously won time trials in both the Tour and the Giro. Today, he might join the exclusive club of stage winners in all three grand tours.

Michal Kwiatkowski will be licking his lips after trying out this course. To me, he’s the best pick to beat Dennis. That is if he has been able to hold on to the outstanding post-Tour shape he showed in Tour de Pologne earlier this month. The climb and subsequent downhill section will favor the Pole a bit compared to Dennis. Kwiatkowski is amongst the best descenders in the world and even though this isn’t a technical descent, he might still be able to gain time on his rivals on this part. Afterwards, it’s all about who has something left to push the needed power on the last two kilometers. Kwiatkowski won the opening time trial in Critérium du Dauphiné this year. It won’t be a big surprise if he repeats that performance today on such a favorable course for him.

One could argue that Victor Campenaerts should be in the favorites category as well. However, with the hill and short distance in mind, I see both Dennis and Kwiatkowski as stronger winner picks. Still, the newly re-crowned European Time Trial Champion should easily make podium as he did in the opening time trial in Giro d’Italia this year. It will take a huge performance to win though. It’s also worth noticing that Campenaerts wasn’t originally selected by Lotto Soudal to do the race. He was set as reserve and only got the call to go to Málaga after Tomasz Marczyński had to forfeit due to injuries.

On paper, Matthias Brändle should be able to do very well in this stage. He hasn’t had the season he had hoped for but it might change in this Vuelta. Usually, Brändle finishes high up in these short time trials and if you constantly can make Top10, then the podium isn’t far off when we talk time gaps in the matter of seconds. However, Brändle under-performed heavily in the European Championships at the beginning of the month and again in Binck Bank Tour. It’s hard to predict in what kind of shape we will see the strong Austrian but if he’s on top of his game, he’s definitely one to look out for on this course.

The same goes for riders like Jonathan Castroviejo, José Gonçalves, and Steve Cummings. All three have what it takes to put in a big performance today. Castroviejo was narrowly denied winning the European Championships by Campanaerts and he will be eager for revenge. However, the distance may be a little too short for him. I’m sure he’ll be up there though. Gonçalves probably surprised quite a few with his performance in short time trial in Giro d’Italia but make no mistakes; the Portuguese has an incredible engine and a lot of raw power in the legs. He’s not a favorite today but he should be able to make Top10 and maybe even better than that. Cummings is always a big question mark. His performances are like his positioning in the peloton. He’s either at back or at the very front fighting for victory. After a very disappointing first part of the year, Cummings now aims to salvage what’s left of the season. On paper, the course suits him just fine and on his best days, he could even go for the podium. Time will tell what version of Cummings we get to see in this Vuelta.

As you may know, I’ve teamed up with the fantasy manager site Zweeler for this year’s Vuelta a España. In addition to their big overall competition, they also have stage competitions with a daily prize pool of 500 Euros for this opening time trial!